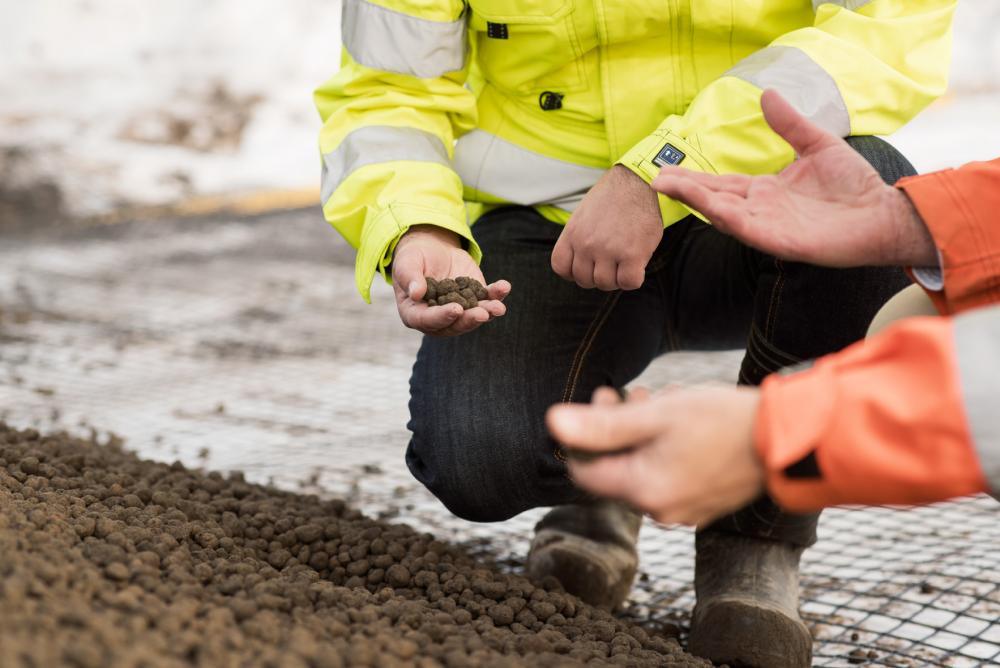 It is clay fired at very high temperature.

Leca® LWA was first produced in Scandinavia in the 1930's for the production of lightweight blocks, it was soon discovered that the insulating properties of the material could be of benefit to failing highways and railways throughout Scandinavia and in 1958 following many years of testing Leca® LWA was accepted as a proprietary fill material in the Scandinavian countries.

The raw material selection and production of Leca® LWA is strictly controlled to ensure a uniform, high quality product that is structurally strong, stable, durable and inert in addition to being lightweight and insulating.  Today Leca® LWA is used in many applications such as Geotechnical Fill, Masonary Blocks, Horticultural Blends, Filtration and Bio-filtration.

How is Leca® LWA manufactured?

Leca® LWA ia a ceramic lightweight aggregate produced by expanding selected clays; glacial clays tend to contain most of the essential properties allowing expansion when heated to their optimum.Once treated, the excavated clay is passed through a rotary kiln and fired to a temperature of approximately 1150°C.  This process expands the material 4 to 5 times its original volume creating ceramic pellets with a cellular inner structure.

Will any measures be needed to protect the fill material from degrading under any circumstances?

•    It is necessary to separate the Leca® LWA from any surrounding material containing fines by use of a geotextile to prevent migration in to the open textured Leca® layer.
•    Depending on the materials use and location, it is usual to cap the Leca® to protect the fill from contamination and growth.
•    Where loading is expected, the capping layer type and thickness is to be calculated to avoid point load and distribute the load adequately to prevent crushing and rutting.
•    During construction, in order to limit mechanical breakage which usually occurs in the top 75 - 100mm layer, it is best to compact using the deepest compaction layers possible - up to 1 metre.  This breakage though will not affect the performance of the Leca® LWA but may increase the reduction in volume from 8-12% to as much as 15-20% if thinner layers are installed, narrow tracked compaction vehicles used or the number of recommended passes exceeded.
•    Leca® LWA is ceramic (fired clay) which is not known to degrade due to water being apparent or time.
•    Please contact us should you need further information or clarification.

Will the material have any adverse affects or environmental issues regarding flora & fauna?

Leca® is not known to harm flora and fauna and is in fact used by many horticulture applications such as within growers green houses, green roofs, sports pitches, flower beds etc. and is accepted by the British Orchid Grower Association. When mixed with soil, Leca® will increase aeration to roots and moisture retention within the pellet can keep the soils moist for extended periods during dry weather conditions. For more information and advice, please contact us.

Are there any issues with destabilisation of embankments by animals?

We are not aware of any embankment destabilisations due to animals and would expect Leca® to prove difficult for the animals to burrow. We would recommend similar consideration be used as that when using traditional fill.

Will roots of trees etc., potentially destabilise the embankments?

We are not aware of any embankment destabilisations due to tree roots but would recommend similar consideration is used as that when using traditional fill.

As embankments are in possible flood risk areas, what are the issues associated with floatation/degradation of the materials or might there be any other issues caused by the embankment location?

Leca® LWA is a stable ceramic pellet hence no degradation has been experienced or is expected to the material.  The compacted fill allows the water to rise and fill all of the voids between the pellets and then quickly drain away when water levels drop. The individual pellets will absorb a percentage of the water, increasing over time with a maximum of approx. 85% of material weight with long term saturation.  The pellets will dry over time once the water has subsided.  For more information and advice please contact us.

Might the material restrict growth of the possible landscape planting on the embankments?

Leca® LWA is used as a growing medium so it will actually promote growth. In this type of application, it is likely and there should be a geotextile and topsoil between the Leca® LWA and the vegetation during planting. However, after a period of time the roots will find their way through the woven geotextile and work with the Leca® LWA where they will receive air and moisture trapped naturally within the material. For more information and advice please contact us.

What is the carbon footprint of providing the material - especially in comparison to other locally sourced standard bulk fill materials?

As you would expect, as Leca® LWA is produced in a kiln the carbon footprint effect appears high however, our production team are continually looking for ways in which to reduce and offset these effects by using for example, materials that would normally be sent to landfill for use in the burning to heat the kilns which in turn is re-directed as a renewable energy for the factory and offices.

During transportation, we ship in large volumes to the UK keeping the CO2 emissions per m³ reasonably low.  Once the material reaches the UK port, it is stored at the port until it is required by the customer, hence no increased CO2 emissions through double handling.  When required by the customer, we transport as much material as possible per vehicle using walking floor trucks which in the dry June of 2011, one delivery was calculated at 102m³. On average, walking floors carry in excess of 70m3 thus reducing the amount of traditional aggregate delivery vehicles by up to 8!

When being installed in a typical application, the overall energy exerted during the placement and compaction of the Leca® is considerably reduced due to the deeper compaction layers, the type of compaction equipment used, less volume reduction during compaction and the fewer passes necessary to achieve optimum compaction.

Leca® LWA is an inert material that can be used and re-used on site and there is no need for disposal of excess to landfill.

Are there any issues in placing and compacting Leca® LWA?

Leca® LWA is much faster and easier to place than traditional fills due to its light weight, rounded nature and installation layers of up to 1 metre in depth which will help save program time and cost. However it is due to its rounded nature, the construction process needs consideration as this material cannot be driven over by wheeled vehicles until capped. It is recommended that wide tracked vehicles are used to place and compact Leca®.

During installation, in order to limit mechanical breakage which usually occurs in the top 75 -100mm layer due to the point load of the compacting vehicle tracks on the pellet and vehicle turning, it is best to compact using the deepest compaction layers possible of up to 1 metre depth and ensure the recommended compaction passes are not exceeded to avoid over compaction. This breakage will not affect the performance of the Leca® LWA but may increase the compaction loss from 8-12% volume to as much as 15-20%.  Where thinners layers of Leca® LWA are required i.e. 150 - 600mm, the compaction equipment should be limited to a vibrating plate compactor if feasible. In difficult to access areas, Leca® can be pneumatically installed using the Leca® blowing vehicle.

Are the materials inert or subject to degradation by fuel spillage, acids, fire etc.?

Leca® LWA is clay made inert through the firing process and is not subject to degradation, from chemical or acid spillage. Temperatures would have to exceed 1200 °C before any concern of the effects to the Leca® aggregate.

Are there any particular storage issues such as dust, moisture loss etc., that could affect stockpiling (additional costs for protection)?

Storage of Leca® LWA should be on clean hard standing or a geotextile covered area to avoid the migration of sub-soils or localised stone/rock being dragged into the material.
Inclement weather will not adversely affect Leca® LWA though moisture will increase the material density which will fluctuate given the level of moisture obtained or released.

If storing in dry weather conditions, it may be advisable to dampen the Leca® LWA to avoid airborne dust where necessary

It is advisable to store Leca® LWA away from an area likely to flood. However if this is not possible, bund the storage area to prevent floatation.

Are geotextiles required for side slope stabilisation?

Geotextiles are used primarily to prevent the migration of fines into the Leca® LWA fill and not for stabilisation purposes.

Should increased stabilisation be required or the side slope increased to in excess of 1:2, there are a variety of methods used which do include Geotextiles and geogrids however, please contact us for further information.

Is a drainage layer required?

Leca® LWA is a free draining material and regularly used as drainage media. No additional drainage layer is required but in an area subject to flooding, it is good practice to install weep pipes through the capping within the base of the Leca® LWA fill to allow the water to drain out when waters subside as the capping layer may act as a tanking.

Are there any requirements for issues with wick drains?

Wick drain requirement is identified during design consideration and usually not required when installing Leca® LWA. Wick drains have been used in conjunction with the use of this material before now but it is advisable to consider the self-draining properties of Leca® LWA before designing in wick drains which may not be required.

What is the cost per m3

The cost will vary depending on location, site conditions and any special requirements that may need to be considered in terms of delivery. Please contact us to discuss your requirements and obtain cost indication or quotation.

Where are the materials for Leca® sourced/ produced?

We have kilns located across Europe but for the UK, we import primarily from our Danish, Portuguese and Norwegian kilns. Our stock is located in the ports of Goole, Garston, Newport and Kings Lynn however, depending on volume required, we can ship to a port better located to suit your needs.

This site uses cookies and other tracking technologies to assist with navigation, analyse your use of our products and services, assist with our promotional and marketing efforts, and provide content from third parties. Please review our Cookie & Privacy Policy. By continuing to browse the site you are agreeing to our terms and conditions.
Agree More info